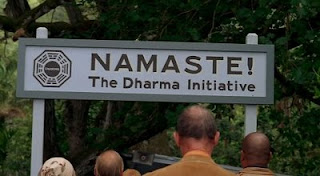 Now that Owen has a regular bedtime (hurray!), we're able to squeeze in some TV. And if there's only time for one show, it's gotta be Lost. It's hard to wait even a week for a new episode.

Ok, so lots of questions after last night's "Namaste" episode: Why didn't Sun time travel back to the 70s along with the other Oceanic 6? Why doesn't she see John Locke alive back on the island? How come Christian appears in the Dharma baracks and not the cabin? Why does Christian show her a photo that doesn't have Jin in it?

Phil came up with a pretty interesting theory after watching the preview for next week. He thinks that the reason Ben ends up in the sick bay when Locke sees him isn't because Sun knocks him out with the paddle (way to go, Sun!) but because something happens to Young Ben with Sayid after him in the 70s and future Ben falls into a coma. How's that for a nifty twist?

For other Lost fans, must reads are the EW Totally Lost blog with Doc Jensen and the Washington Post chat blog (we tip our hat to Rachel for the recommendation).

And after talking to my friend Aparna, she throws a doozie of a theory this way: She thinks that Sun, Lapidus and Ben died in the plane crash. That would explain why Sun didn't time travel back with the Oceanic Six and why she was able to see Christian and he said that she would have a journey ahead of her. Good stuff to mull over -- until next week.
Posted by The Muze at 3/19/2009 08:55:00 AM