Straight out of Seinfeld 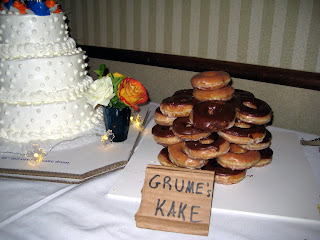 Went to a friend's wedding a few weeks ago and had a grand old time. When we arrived at the reception, guests were mingling by the bar. There was one guy in a blue shirt who was hovering by the buffet, opening the silver tins before any food had been distributed. When the buffet opened, he was the first in line. We followed suit because the food was disappearing fast. Shortly after we sat down at an open table, the bride and groom were up at the front of the room with the minister.

As they were saying their vows, the hotel caterers starting setting up more food, clanging the trays and making a racket. Most of the guests were shushing them, but that's when we noticed the guy next to us get up and refill his plate. The Buffet Guy! What nerve getting food during the vows! It was all we could do to contain ourselves. He was a character straight out of a Seinfeld episode.
Posted by The Muze at 4/10/2008 11:02:00 AM