SATC on the Big Screen 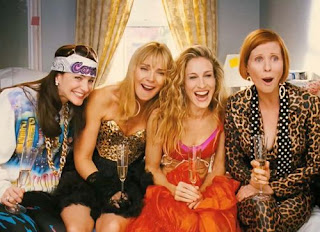 Unless you've been hiding under a rock, you've probably heard that Sex and the City opens in theatres today. Even though I haven't taken the ubiquitous "which SATC character are you?" quiz, I am dying to see the movie.

Read my interview with Director Michael Patrick King in the new issue of MovieMaker. He did tell me that he named Big's character after his favorite filmmaker Preston Sturges. I also liked what he said about screenwriting:

"Put all your energy into your script. Your script is your stock. If your stock stays up, you will work."

Lost Spoiler Alert: Ok, Lost fans, my head is still spinning from the season finale last night. I've got more questions than answers, but it was a real nailbiter. How did Locke get off the island? Did he need to move it again? What happened to Claire? Is Jin dead? Did Farraday's raft move with the island? And is Charlotte the spawn of the others, like possibly Ben's child?
Posted by The Muze at 5/30/2008 11:52:00 AM

Labels: film, Sex and the City