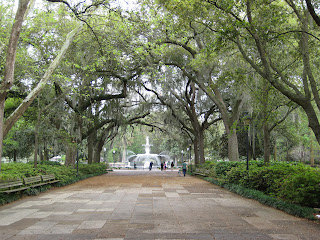 Savannah was even lovelier than I had imagined. It's called one of America's best walking cities and for good reason. We stayed in the historic district on Bay St. where we had perfect access to the riverfront and the squares with majestic trees covered in Spanish moss. 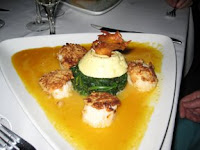 For food lovers, Savannah is bounding with options. Elizabeth's on 37th is one of the famed Southern restaurants housed in an elegant mansion and lived up to its grand reputation (the oyster trio is a must, but skip dessert and make reservations). We skipped Paula Deen's and had lunch at the Gryphon Tea Room in a restored turn-of-the-century pharmacy across from ShopSCAD. These macedemia-encrusted scallops were from the New South Cafe, which also makes a mean Brunswick stew. I would have liked to try Local 11 Ten, but they were booked until late for dinner. 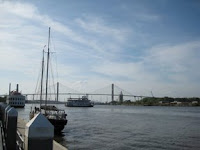 If you're going to Savannah for the weekend, check out the NYT's 36 Hours In, which has a decent overview of places to see. Even though it's been almost 15 years since the book Midnight in the Garden of Good and Evil came out, droves of tourists still flock to town. But cool SCAD buildings, a slew of art galleries and a thriving music scene are a convincing magnet for the "Creative Coast."