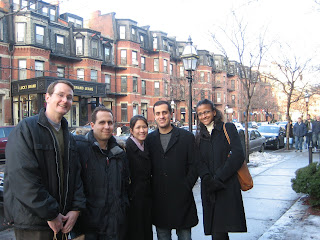 We caught up with old friends in Boston over the holidays and even crossed paths serendipitously on Newbury Street. It was fun to walk and even T it around the city. We chilled in the lounge outside Clink at the Liberty Hotel, which is a pretty cool conversion of the old city jail. Goodbye and good riddance, Buzzy's Roast Beef.

We dined like royalty over the week, especially with Phil's mom cooking fiendishly. I have to rave about this amazing dessert at Pomodoro in Brookline. It's a fig bread pudding with chocolate sauce that is simply heavenly. And then friends Paul and Patricia whipped up an impressive 5-star dinner. We started with a potato latke topped with caviar, followed by seared tuna with truffle oil and then on to a hearty bouef bourguignon. At the salty end 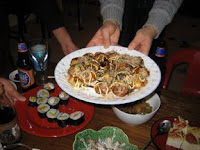 of the spectrum, we sampled octopus balls at our friends Toshi and Rinko's place. You pour the batter into a electric griddle and drizzle bits of seafood and it comes out as a spongy fried ball. Delightful!