Owen has always loved books and he is drawn to anyone reading a book, even if it's a story he has heard again and again. He is just starting to sound out words by the letters, but he's  memorized most of his favorite stories.

Here are some of our faves:

Willoughby & The Lion by Greg Foley
Owen's nana picked this out from the library this summer and it has the feel of a children's classic. There's something magical and timeless about the story of a boy who befriends a lion. And I admit I got teary at the end.

Iggy Peck Architect by Andrea Beatty
Iggy is a renegade kid who builds sculptures out of pancakes and dreams up architectural towers. His teacher tries to squash his imagination until he saves the day on a class trip. Love the humor and marching to your own beat.

One by Kathryn Otoshi
On the surface, this book is about colors. But it's much more than that. Simple and powerful with the message that anyone can stand up to bullies. 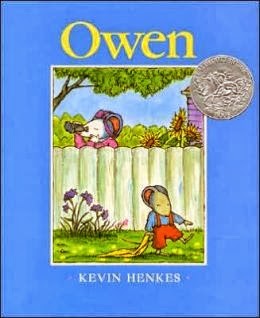 Owen by Mo Willems
We love getting books with the kids' names in them. This one was so good that I once told someone the advice about using vinegar on the corner of a blanket and thought I read it in a parenting book. And yes, I used to have a blanket that I dragged everywhere so it hit close to home.

The Seven Silly Eaters by Mary Ann Hoberman and Marla Frazee
One of Phil's co-workers got us this one about the Peters' clan. Each kid will only eat one food that has to be prepared one particular way, usually with the mom making it from scratch.

Some runners up: For toddlers, Pete the Cat was in regular rotation and a hometown favorite. These days Owen loves The Octonauts, which is also a hit show. Sound the Octo-alert!
Posted by The Muze at 10/15/2013 10:06:00 PM