A Beautiful Wedding in the Berkshires 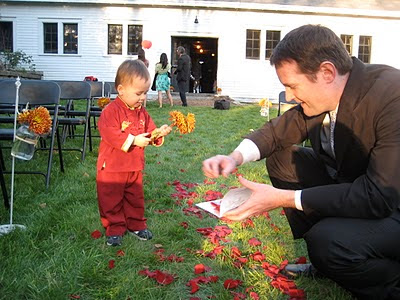 Over Columbus Day weekend, we traveled to Williamstown, MA for my cousin Geraldine's wedding. She went to Williams (along with two of her sisters), works there now and bought a old farmhouse with her fiancee Joe. There house was the perfect setting for their outdoor ceremony.

We stayed at a hotel in nearby North Adams and there was a shuttle that picked everyone up for the ceremony. This was very exciting for Owen because the shuttle turned out to be a big yellow school bus. He had only been on a bus one time before at school and it wasn't moving. But it left a big impression because he talked about it for weeks. "Bus. Aisha. Sit." He sat next to his teacher Aisha on the bus.

This time, he was gripped with excitement for the whole ride. "Bus. Fast. Bus. Fast." When we got off to go to the ceremony, he kept looking for the bus. Most of the guests were seated and we took a seat near the back.

The groomsmen came out first. Owen watched. He didn't quite know what was happening. Then the bridesmaids started walking down the aisle. We had a full view of the barn where they were stepping out from. Owen started shouting, "Wo-man! More Wo-man!" We tried to get him to quiet down. But he kept yelling, "More wo-man!"

Catcalls from a toddler.

Fortunately, not many other guests noticed but we took him away from the seated area. He was more than happy to go look for the bus. 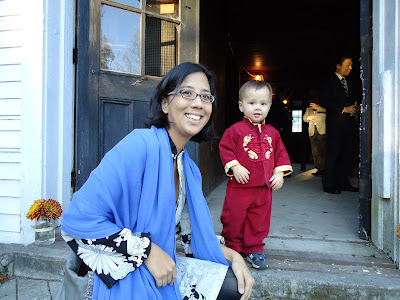 Photo: Jing Mei Yu
From the photo booth at the reception at the MASSMoca: 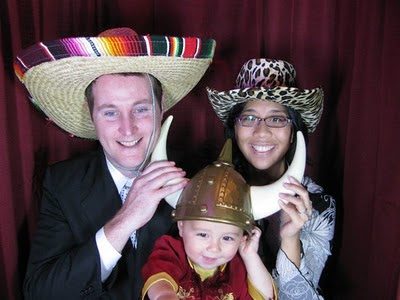