The City vs. The Burbs 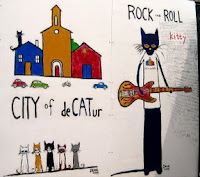 Over the summer in DC, I got into a heated conversation with friends about whether I live in a city or a suburb. In Atlanta, if you live inside the perimeter (ITP) or 285, that's considered in-town as opposed to outside the perimeter (OTP) like Alpharetta. For me, the 'burbs conjures up images of well-manicured lawns and huge mcMansions. (Just like when I lived in Cambridge, MA, I did not say I lived in a suburb of Boston, though that may technically be true.)

So I thought it was pretty funny when alt-weekly Creative Loafing came out with its Best of Atlanta issue. Best suburb? Decatur. Here's what they had to say:

"Because it's closer to intown Atlanta's coolest neighborhoods than most of the rest of intown Atlanta, people tend not to think of Decatur as a suburb. But a suburb it is."

So I stand corrected.

But I do agree that Decatur is the best place to live. The blurb goes on: "It has public transit, and plenty of places within walking distance of each other, including charming shops, great restaurants, bars and an increasing number of mid-rise condominiums."
Posted by The Muze at 10/01/2007 12:03:00 PM