A World of Good 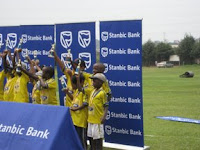 Went to watch a cricket match over the weekend. It was part of a tournament for the Kampala Kids League, which is a charity that organizes soccer (football), basketball and cricket for kids of all ages and incomes. Met with the founder of the Kids League who spoke about how sports help to break down barriers of all kinds. 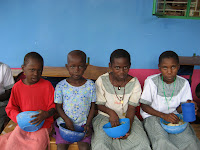 There we also met Brother Prem from Missionaries of the Poor, who told us that 28 kids from his orphanage played on the teams. He invited me to visit his orphanage which is in the slums of Mengo Kissenyi. Most of the kids were in school but there are a number with physical and developmental disabilities. Brother Prem brought me to a girl lying in bed who is all bones and looked about nine. She is 16 and a Sudanese refugee who was abandoned on the street of the neighborhood. The orphanage only helps the poorest of the poor, and their funding comes a sister church in Jamaica, but they are in great need of food, toiletries, school uniforms and shoes.
Posted by The Muze at 6/26/2007 07:09:00 AM